There are a number of benefits to enchanting the various equipment items your character comes across in the world of TERA. The primary reason to enchant a weapon is to make it stronger. With each enchantment rank, a bonus is added to the Attack and Impact modifiers. For armor items, the Defense and Balance modifiers are improved. 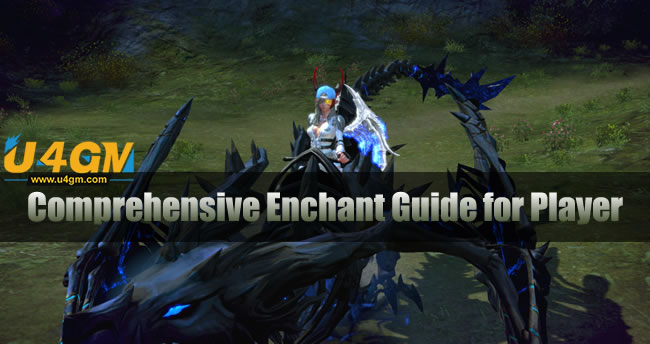 The higher the level of the item, the greater the bonus value. The default state for items is an enchantment rank of +0, with the highest rank which can be achieved being +15. An item's enchantment rank is always displayed in front of the item name.

Enchanting an item has two impacts. The first is that it raises the item's ilvl and therefore increases its base stats. The second is that it can activate extra effects. Well, actually, three impacts... enchanting a weapon past +6 makes it glow! A blue glow from +7 to +9 and a red glow from +10 to +12.

Enchanting an item can make it as powerful as items one or two tiers higher. There is endgame gear that cannot be enchanted, but it is rarely more than stopgap placeholders or high-quality fodder. Enchantable items have more effects and can reach a higher ilvl with better base stats. The best gear in the game is only achieved through enchanting.

However, you will notice that enchantable items initially start out at a lower ilvl for a given tier than their unenchantable counterparts. This initial deficit is usually pretty easy to make up, and you typically overtake the ilvl of the unenchantable alternatives by the time you get to +6.

The ilvl shown in an item's tooltip includes the increase derived from enchantment, so it can be used as a direct comparison against other items. The ilvl boost per enchantment level is dependent on the item type and the tier of the item. I don't know the exact formula, but the following table gives a good approximation of the expected ilvl boost from the unenchanted baseline ilvl when enchanting tier 12, tier 13, and tier 14 items.

You'll find a lot of items on your way to level cap, but not all of these are suitable for enchantment. With so many items available in TERA, how are you supposed to know which items to enchant and which to leave me?

Firstly, jewelry (rings, earrings and necklaces) along with belts and brooches cannot be enchanted. All other items must have an “Enchantable” tag. Items missing this tag cannot be improved through enchantment.

Once you've chosen a piece of equipment to enchant, you need to pay attention to the weapon's tier. Each item has a minimum character level, a tier and an item level. The tier also plays an important role in dismantling. For example, a tier 4 weapon can only be dismantled into tier 4 feedstock.

The amount of alkahest required for each attempt is equal to the tier of the item being enchanted. For example, one attempt on a tier 13 item requires 13 alkahest.

Each attempt requires only one fodder piece, but the fodder must be an item of the same tier and the same slot as the item you are attempting to enchant. The fodder must also be "extractable", which is indicated on its tooltip. It does NOT have to be of the same material or quality, however. For example, you can use any tier 13 weapon, be it a lance, a bow, etc., of any quality, as fodder to enchant any other tier 13 weapon. Likewise, you can use any tier 12 boots, be they cloth, leather, or plate, as fodder to enchant your tier 12 boots.

The odds that an enchant attempt will succeed are dependent on the current enchantment level of the item, the quality of the fodder used, and the type of alkahest used. The higher the enchantment level, the lower the chance of success. The higher the quality fodder or alkahest, the better the chance of success. To enchant an item from +1 to +4, common and uncommon fodder is usually fine. You will use Alkahest as the reagant, which you can buy from general merchants for 10s50c. For +5 and +6 you may want to begin using rare fodder as well.

To get to +7, +8, and +9, you will want to use mostly rare and sometimes superior fodder. You must use Refined Alkahest as the reagant, which can be purchased from specialty Vanarch vendors for 14g14s each. Because of the jump in cost for the reagant after +6, getting to +6 is usually a simple and cheap task while getting +7, +8, and +9 is a lot more costly.

+9 is the highest level that a normal item can be enchanted too. However, a masterwork item can be enchanted to +12. Attempts to enchant past +9 require the use of Masterwork Alkahest (MWA), which is only available from dungeon drops, open world boss BAMs, and Locked Strongboxes, so it is an expensive item on the Trade Brokerage. The drop rates were reduced in the "TERA: Rising" expansion so the prices of this item are in flux right now, though on my server it runs 80g per unit.

You do NOT need to use Masterwork Alkahest to enchant a masterwork item up to +9. You can use the same alkahest as for a regular item. The MWA is only necessary for attempts to enchant +10, +11, and +12.

Every enchantment is made using the Enchantment interface, which can be opened by pressing “T” on the keyboard.

Each enchantment requires an item to be enchanted, along with feedstock and alkahest of the same tier.

Feedstock can be acquired from quests or by dismantling other items. Alkahest can be obtained as loot from monsters or purchased from NPC merchants.

The amount of alkahest required is determined by the tier of the item to be enchanted. A tier 1 item requires exactly 10+1 alkahest, whilst a tier 5 item needs 10+5 alkahest per attempt.

However, not every enchantment is successful. There are two possible outcomes: when an enchantment succeeds, the enchantment rank increases. If the attempt fails, nothing changes. The item will never be destroyed, nor lose a rank.

If an enchantment attempt up to +12 fails, a corrective percentage value is used. Each time an enchantment fails, this corrective value is increased, which in turn increases the chances of a successful enchantment. For more tips about how to farm gold in tera, stay tuned to U4GM. You can also choose U4GM where you can buy gold TERA.